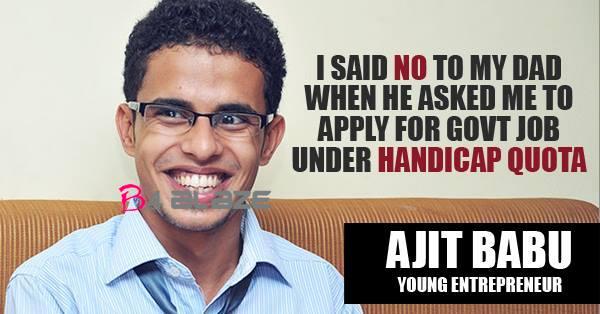 Ajit Babu, 26 years old and suffering with cerebral palsy, has set up three firms in Bengaluru after declining his father’s advice of getting a job under the handicap quota.

Ajit was born in the month of July, some 26 years back, it was a premature delivery and he was kept in incubator for more than 2 months. He weighed 1.4 kg at the time of his birth.

His disease of cerebral palsy was detected soon by the doctors and his growth was less than the children of his age. He is five feet tall and when he walks, he limp a little but as far his studies is concerned, he studied in one of the best schools of the city, Spastics Society of Karnataka helped him a lot in his studies. He has keen interest in English Literature, Journalism and Psychology, and he chose these subjects when he started studying in Kristu Jayanti College.

He left college in 2008 mid-way as he was not able to deal with lab work in psychology subject but nothing can stop him from doing what he likes.

He founded Dream Click Concepts in the year 2009 with his best friend Harish Narayan, Ajit told, “My love for journalism and media egged me into beginning my first startup. I could write, I could speak, and the whole of South India was doing in-film advertisements, so I thought I should try my hand at it.”

At the same time, they also started Street Light Media whose main work was to make ads for clients, music videos and shows for TV. Ajit told, “We are very passionate about the two media companies we [Harish and Ajit] have built. We are both huge movie buffs and love shooting photos and videos.”

In 2012, Ajit thought of Lifehack innovation, he said, “In 2012, I started doing consulting on branding, and began teaching people how to run startups. I gave motivational speeches. I was even making some money. Then, the idea for LifeHack Innovation struck me.”

When Nepal was hit by an earthquake, Ajit thought how difficult it would be for Nepal to reconstruct again from nothing so he bought some solar lamps and sent them to Nepal. During that time an idea strike him when, “I was sitting outside in my favourite café, where all the smokers sat. There are no power points there for charging. Everybody borrows each other’s power banks to charge their phones. I looked down at the solar lamp in my hand, and it looked like a power bank. So I thought, why not make a solar-powered power bank?”

For the next six months, the only thing that was stopping him was money as he needed seven lakhs to make the first prototype and run the company, he was pretty confident about his idea, he told, “I thought money would be a problem, but no. All I had to do was post on Facebook and offers for help poured in. I just said that I was building a renewable energy company, and random Facebook friends asked for my number, talked to me, and gave me cash.”

He found Lifehack Innovations in July this year with a five member team of techies and legal officers. The first product of Lifehack will be solar and wind-powered portable power bank, it can be charged by electricity too. It will available in market by October 2015.

When asked about his future plans, Ajit has this to say, “I will study more. I will finish journalism. I will even do a Master’s, maybe from Columbia too! After all, this field is the only one where you can make money out of the freedom of expression!”

Does your account number change and your money goes to someone else’s account? There is a solution.

What happened when an Emirates plane was struck by lightning while running on the runway!

Women are not allowed to wear glasses here, The reason is

Is this the secret behind Malayalees eating food by hand?

This is the reason why people talk in their sleep!

If you have this one rupee note in your hand, you can become a millionaire now!

The most beautiful woman truck driver in the world!

To understand the nature of women, it is enough to pay attention to these three body parts!

Even Newton would be shocked to see this, Here we can fly in the air

This is the reason why lawyers wear black coats and white shirts!