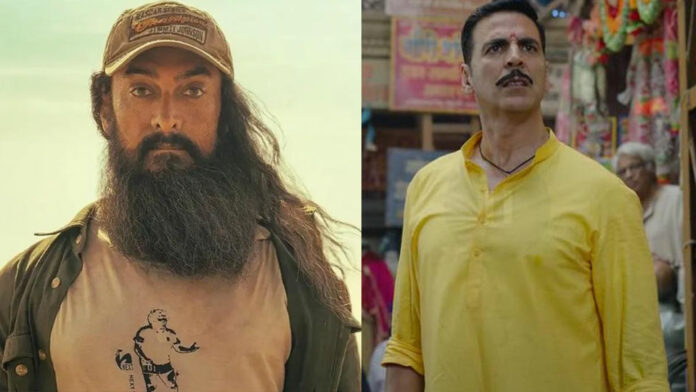 Laal Singh Chaddha and Raksha Bandhan, two major Bollywood movies that debuted in theatres yesterday, had a dreadful day at the box office. On the auspicious day of Raksha Bandhan, both movies were supposed to lure crowds to theatres, but they utterly failed. Despite being released on the same day, which should ideally result in better occupancy rates, both films had an average occupancy of 25% throughout the day.

On its opening day, LSD brought in Rs. 10.75 crore nett, which is a quarter of his previous blockbuster hit, Thugs Of Hindostan. The film’s performance outside of East Punjab has not been as strong as it has been there. Day 2’s advances are less than day 1’s, and it is very possible that the movie will experience a decline in its

Raksha Bandhan made a pitiful Rs. 7.5 cr nett on its opening day, which is less than the previous two Akshay Kumar movies to hit theatres this year, Samrat Prithviraj and Bachchhan Paandey. The movie outperformed Laal Singh Chaddha in several major circuits where Raksha Bandhan’s impact was felt, but it performed worse in metro areas and most other locations, where Laal Singh Chaddha was unquestionably the top option. Although a film of this sort mostly depends on walk-in attendance, the advance bookings for its second day don’t appear encouraging.

The industry has had a terrible Raksha Bandhan, and the results are very startling considering that we are talking about two movies with two significant ticket-selling actors who have remained in the business for more than 30 years. It will be interesting to see if both movies can take advantage of the long leaves.