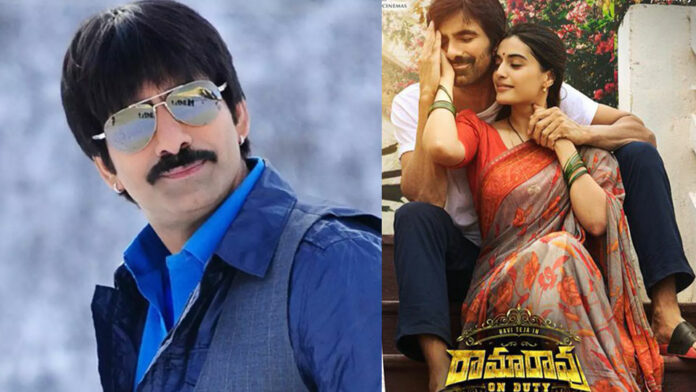 The fans of Mass Maharaja Ravi Teja need to wait for some more time to watch his action spy thriller Ramarao On Duty in the cinemas. The action show was supposed to release in theaters on 17 June. The release has been deferred now because of the after-creation work. The creators will report the new release date for the flick soon.

After this, they will start the promotions of Rama Rao on Duty. The creators took to Twitter and declared, “To bring the best and the massiest output on the big screens, the post-production of #RamaRaoOnDuty is being done with extra efforts and care. Hence, the release of #RamaRaoOnDuty stands postponed and would not be released on June 17th. A new release date will be announced soon.”

The release of #RamaRaoOnDuty is postponed and would not be releasing on June 17th due to extensive post production for the BEST and MASSIEST output!

A New Release Date will be announced soon. pic.twitter.com/9ulOkExtsg

Sarath Mandava is beginning his profession as a director with this much-discussed project, which has been supported for an enormous scope by Sudhakar Cherukuri under the flag of SLV Cinemas LLP and RT Teamworks. Divyansha Kaushik and Rajisha Vijayan will be viewed as the female leads in the film. The movie is based on true incidents. Venu Thottempudi, Nasser, Sr Naresh, Pavitra Lokesh, ‘Sarpatta’ John Vijay, Chaitanya Krishna, Tanikella Bharani, Rahul Rama Krishna, Eerojullo Sree, Madhu Sudan Rao, and Surekha Vani will likewise play major roles in the action film. The film will mark the comeback of Venu Thottempudi.

In the meantime, Ravi Teja will likewise play the lead in Trinathrao Nakkina’s Dhamaka, and Sudheer Varma’s Ravanasura. The actor also has Tiger Nageswara Rao’s Krishna Vamsi ready to be released in 2022.