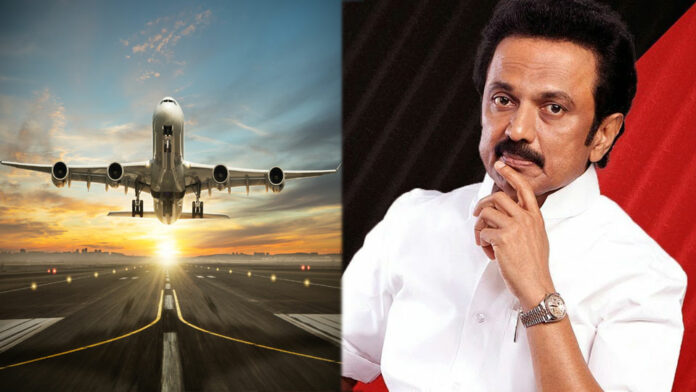 M.K. Stalin, the chief minister of Tamil Nadu, stated on Tuesday that the construction of Chennai’s second airport in Parandur will cost an estimated Rs 20,000 crore. He stated in a news release that the future Parandur greenfield airport and the current Mennambakkam airport would both run simultaneously.

He added that the ultimate cost for the airport will be determined after a detailed project report (DPR) is created. The new airport will include terminals that can accommodate 10 crore passengers annually, two runways, aprons, taxiways, cargo, and numerous other facilities.

Land purchase and other actions wouldn’t start until the Ministry of Civil Aviation received the site clearance. After that, the state will request “In-Principle” permission for the project from the Central government. The Ministry has given the green light for Chennai to build a second airport.

The Ministry of Civil Aviation is supporting the state government’s choice for the airport’s location, which is progressing the process of building a second airport in Tamil Nadu’s capital city. In response to a query from Rajya Sabha MP Kanimozhi N.V.N. Somu, Union Minister of State for Civil Aviation Gen. V.K. Singh (retd) stated that the Tamil Nadu government has shortlisted Parandur as the location for the Greenfield airport.

However, AAI had selected Pannur as the best location for Chennai’s second airport in its pre-feasibility study, while the state government had discovered Parandur as the best location after conducting its own Techno-Economic Feasibility and Obstacle Limitation Surface surveys. Obtaining land was made simple, and safety and environmental clearances were also considered account by the state government while choosing Parandur.

Thala Ajith begins his world tour on a bike. Is he an actor or a racer??

Air India announced a Great News for all Indian Citizens!