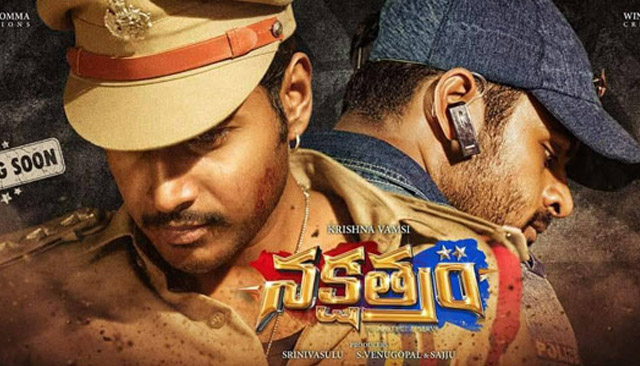 The much-awaited Sundeep Kishan cop drama, ‘Nakshatram’, directed by Krishna Vamsi, has finally hit screens today (August 4).The success of Nakshatram is very crucial for Krishna Vamsi as it will reveal whether the legendary director still has in it to deliver some good films for the audience. Krishna Vamsi’s films always evoke interest despite the fact that he lost form in the past few years. Since he is regarded as one of the best directors in Tollywood, his movies are looked forward to.

Rama Rao (Sundeep Kishan) is an aspiring cop. He dreams of becoming an SI and serving the society. Following a bomb blast that claims many innocent lives, Parabrahmam (Prakash Raj), the honest police commissioner of Hyderabad, vows to rid the city of terrorist activities and forms a crack team led by dynamic cop Alexander (Sai Dharam Tej) for the purpose.

Ramabrahmam (Prakash Raj) plays an honest police commissioner. Tanish is his wayward son, a baddie, and looks quite menacing too. He and his gang successfully conspire to prevent Rama Rao from turning up for the SI exam because of a tiff they had earlier.

An upset Rama Rao decides to take on the society himself even without the uniform and this is the time he finds out that there is a criminal set up behind Tanish. How did Rama Rao crack this case? Where do Regina, Pragya and Sai Dharam fit in this setup? To know the answers, you need to watch the film on the big screen.

Pragya Jaiswal makes her appearance as a sophisticated thief. There are two songs in the first half, one on Regina and the other on Pragya; both are lavishly shot. Sai Dharam Tej makes his appearance as cop Alexander right before the interval.