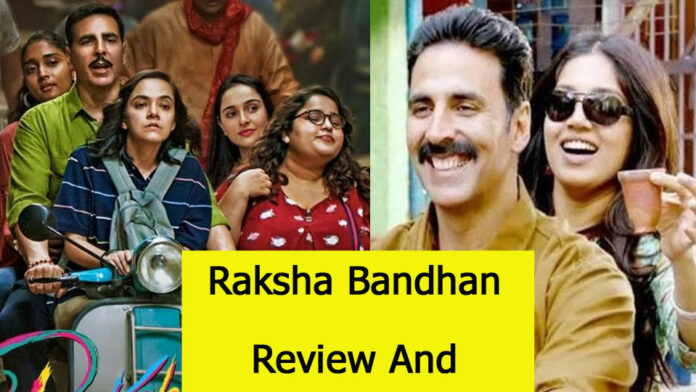 On the occasion of Raksha Bandhan, Raksha Bandhan is here.  The Aanand L Rai film, which stars Akshay Kumar in the lead, and focuses on his character’s relationship with his four sisters, has the simplest of premises.  Here is a man who is almost past the “marriage age” but is still making every effort to marry off his four sisters. These sisters, who are portrayed by Deepika Khanna, Sahejmeen Kaur, Sadia Khateeb, and Smrithi Srikanth, are not exactly “marriageable.” While the oldest of them, Sadia, is faultless, the others all have one flaw or another. Sahejmeen’s character is a tomboy, Smrithi’s character is too “black,” and Deepika’s character is too “fat”! And Akshay’s Kedarnath Lal has his own relationship with his childhood sweetheart (played by Bhumi Pednekar) on the line.

We got a sneak peek at what to anticipate from the trailer. Kedarnath is a man who accepts making dowry payments. He holds the antiquated belief that doing so will guarantee his sisters’ happiness in their new environments. In fact, he silences opponents of dowries by telling them he is not sorry for doing everything in his power to make sure his sisters have happy marriages. The first half of the film is packed with ideas that can be considered “regressive” and conversations that might even be considered embarrassing! But that was only a pretext.

After all, this is an Akshay Kumar movie; a social message can’t be far behind. Of course, the movie wouldn’t promote dowries. But what led to the characters’ change of heart, how did they get there, and how successfully did the narratives of the siblings and Kedar’s romantic interest mesh together? You must see the movie to find out how.

This seemed to be one of Aanand L. Rai’s more straightforward tales. Nothing exciting happens during the heroines’ dhamakedaar entering segment. But we do have amusing conversations, some of them extremely embarrassing but delivered in a funny way. There are several contradictions that sort of stand out. For instance, in one scene in the second half of the movie, Akshay Kumar, who is sporting a mustache, also sports beard. So, while he is naturally salt and pepper, his mustache is a strong black that stands out on the screen. It lessens the scene’s intensity and has less of an impact than it should have. We wouldn’t anticipate that from someone like Rai.

Here, Akshay Kumar’s performance merits special recognition. He completely connects with the ball. He really gets it in one scene in particular. It will be challenging to hold your tears because of his intense desire. He lets his vulnerability take over in the scene and it is a treat to watch. Bhumi Pednekar’s character might have very limited scope, but Bhumi delivers in the only scene where she has been allowed to perform. She proves that she is a brilliant actor.

Sadia, Deepika, Smrithi, and Sajehmeen, the sisters, don’t have a lot to do. All they need to do is portray the sisters. However, we can see all the four girls put in earnest efforts.  A tighter script was required. The initial part clearly needed additional editing, and following the climax, certain sections of the second section required more care. As I’ve already indicated, this is one of the simpler movies, so even Himanshu Sharma and Kanika Dhillon managed to write a rather simple plot.

Overall, it’s one of those movies that the whole family can enjoy together as they celebrate Raksha Bandhan. It will also make you cry and laugh at the same time.