The sadness of actor Sushant Singh Rajput’s departure had not diminished yet that the second incident in his family happened. The sister-in-law, who had been ill for a long time and in a relationship, passed away. It is being told that she was ill for a long time, she died on Monday night in Maldiha village.

Please tell that Sushant’s cousin sister Sudha Devi was already sick. This has also been confirmed by his family members. It is known that since Sushant’s suicide, his entire family is in a deep shock.

On Monday, Sushant was cremated at Vile Parle in Mumbai, where only a few people from his family, including his father KK Singh, brother Neeraj Kumar Bablu, could go.

Sushant committed suicide on Sunday in a Mumbai-based flat. This news shook the entire country. The whole family is crying over the death of Chirag in his house. According to Sushant’s family, Sushant was to be married in November.

Sushant has a sister living in the US who will leave for India today. But he worries about one thing. Shweta wrote on her Facebook post, “With everyone’s help, the ticket to India has been confirmed.” I will leave on 16 June. But I am worried about the 7-day quarantine period because I have to visit my family as soon as possible. 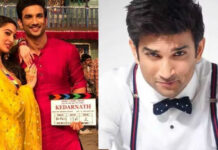 High Court refuses to stay the release of film based on Sushant Singh Rajput, father challenged the decision of single judge bench

Actor Sushant’s death was a murder, Controversial voicemail from a doctor at AIIMS is out!

Sadak 2 trailer is a second most hated video in the world!

If a person commits suicide, his eye will be pushed out. The tongue will come out. None of this was on Sushant’s body!

The body was wrapped neatly in cloth, and I was the one who carried Sushant’s body from home to the hospital by ambulance; Ambulance...