Housefull 4 Box Office Collection Day 1: Akshay Kumar, Kriti Sanon, Bobby Deol, Riteish Deshmukh, Kriti Kharbanda and Pooja Hegde starrer Housefull 4 have rocked as soon as released. Housefull 4, which was released on the special occasion of Dhanteras, has given a strong performance in theaters and has given a tough competition to films like ‘Bull’s Eye’ and ‘Made in China’. According to Box Office India website, ‘Housefull 4’ has earned around 19 to 20 crores on the previous day. On the very first day, this explosive collection of ‘ Housefull 4 ‘ has been the biggest opening in the Housefull series so far.

According to Box Office India website, ‘Housefull 4’ has emerged as the highest-grossing comedy film after ‘Golmaal Again’. But aside from earning, the film ‘Housefull 4’ has not been able to win the hearts of critics. Film critic Taran Adarsh ​​has given only one and a half stars to ‘Housefull 4’, as well as describing this movie as the weakest film of ‘Housefull’ series. According to the tweet, the film exerts its full power to make people laugh, but its poor direction and over the top performance drowned the film.

The story of ‘Housefull 4’ is from 1419 in Sitamgarh, where Akshay (Bobby Deol), Ritesh, Kriti, Pooja, and Kriti love each other, but for some reasons they are separated. Go. Six hundred years later, all three couples are reborn, and after this, houseful type confusions begin again. Miss match of Couples and many cameos one after the other. Overall, an attempt has been made to build Housefull 4 on the lines of the first three parts. The story is very weak. The jokes of force have been punched, and in many places, even laughter does not come. Dialogues are very pale.

2019 Most Trolled Movies, Student Of The Year 2 On The Top 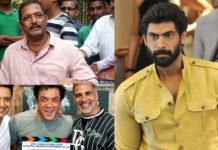