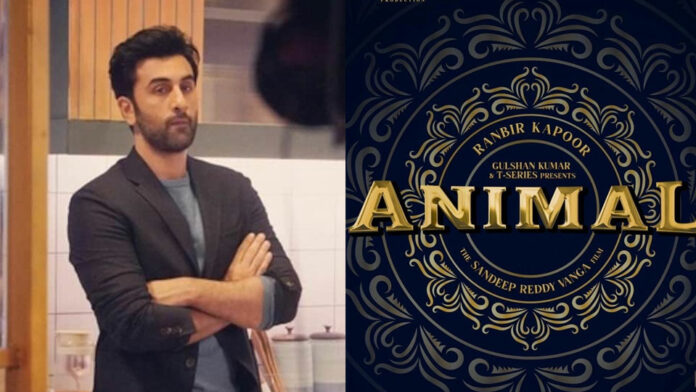 An image from the set of Animal, starring Ranbir Kapoor and Rashmika Mandanna, has surfaced online. Although the star of Dear Comrade isn’t visible in the photo, Ranbir and Anil Kapoor can be seen filming the movie at the Pataudi Palace. Yes, you read that correctly. This time, Kareena Kapoor Khan’s cousin will be filming at Sharmila Tagore-Saif Ali Khan’s lovely family home.

Ranbir Kapoor is seen in the photo sporting a clean-shaven appearance and donning all-black attire. The performer has a snack and a bowl in each hand. Anil was standing on his right, dressed in all-black with Ranbir. Anam Khan, a makeup artist, posted the image.

It appears that team Animal is residing at the Pataudi Palace for a while. Unknown to most people, the royal estate on the outskirts of New Delhi has frequently served as a shooting site for movies and television shows. These include Saif’s television series Tandav and the hugely popular Veer Zaara starring Shah Rukh Khan and Preity Zinta.

Sandeep Reddy Vanga, known for his work with Kabir Singh, is the director of the movie Animal. Earlier this summer, Himachal Pradesh served as the backdrop for a section of the movie. After being married to Alia Bhatt in April, Ranbir jumped right into the film’s production. At the time, photos of the actors from the schedule taken in the highlands had leaked.

Rashmika’s third Bollywood movie is titled Animal. Parineeti Chopra was originally going to play the lead in the movie. Rashmika was given the part after the actress was forced to decline it. Ranbir and Rashmika will work together for the first time on Animal. Bhushan Kumar, Pranay Reddy Vanga, Krishan Kumar, and Murad Khetani are the producers of Animal.