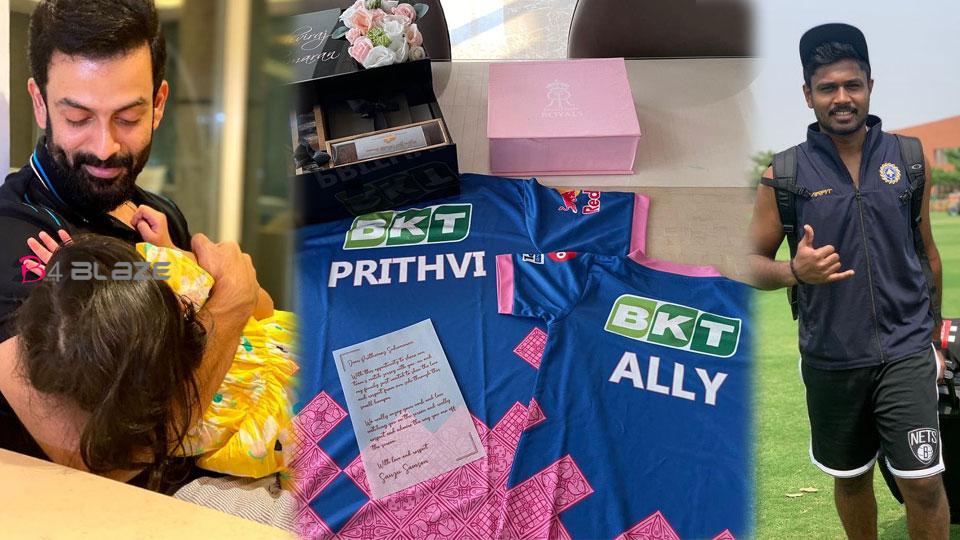 The friendship between cricketers and movie stars is something we see all the time in Bollywood. But now it is clear that there is such a friendship in Malayalam too. Pride cricketer Sanju Samson has sent a gift to Prithviraj Sukumaran and his daughter ahead of the IPL. Prithviraj and his daughter Alli were gifted a Rajasthan Royals jersey by Sanju Samson and a gift package. Prithviraj himself shared a picture of the jerseys with the names Prithvi and Alli on Facebook. ‘Thank you Sanju Samson and Rajasthan Royals for the hamper and the jerseys! Ally and I will be cheering! Sanju..you captaining the franchise is a huge source of happiness and pride for all of us! Looking forward to more of our chats on life and cricket!’ Prithviraj shared a picture of the jersey on Facebook.

Many fans come up with comments under the film. Everyone is sharing the names of their favourite IPL team as commenters. Some people question that Prithviraj is not a Chennai fan, some people want to know the meaning of the post in English. Sanju, who joined the IPL in 2012, has been playing for the Rajasthan Royals since 2013. In between, he went to Delhi when the Rajasthan Royals were banned, but when he returned to Rajasthan, he picked up Sanju again. Sanju, who has done well for Rajasthan in all the previous seasons, has been selected by the management as the team captain this year. Prithviraj and his daughter Alli have been gifted with the chance to face Punjab Kings tomorrow under the leadership of Sanju.