Argentina Fans Kattoorkadavu is a 2019 Indian Malayalam-language film directed by Midhun Manuel Thomas, starring Kalidas Jayaram and Aishwarya Lekshmi in leading roles. The film is written by Ashokan Cheruvil, John Manthrickal and Midhun Manuel Thomas. The film’s musical score was composed by Gopi Sunder. It was released on 22 March 2019.

Since the success of the Aadu franchise, Midhun Manuel Thomas has made his mark among young movie buffs. And hence, making a film with a good number of youngsters, Kalidas Jayaram and Aishwarya Lekshmi, along with a bunch of newcomers in the cast could have scored well for him. Especially since the film had a story with football as a backdrop it couldn’t have been more perfect if the film also had a good story so to speak of.

Kaattoorkadavu in Irinjalakuda is village with a bunch of football enthusiasts. Vipinan and his friends are true-blue Argentina fans and are constantly in clash with the Brazil fans and then later the Germany fans. This is the story of the fans’ lives, love loses and triumphs in the span of four football World Cup seasons.

For a football movie, it has very little football talk, making it viewable to those who aren’t football enthusiasts. Kalidas Jayaram, who plays Vipinan, the lead shines like a penny in every single shot. Not a wrinkle on his shirt, nor a speck of dirt, he looks too rich to play a poor lad who is the sole breadwinner of his family. But as the lead he owns up to his charm and charms the hell out!

Aishwarya Lekshmi comes out the true winner here. Her character is tirelessly one dimensional and a cliched heroine who is cute, hot-headed and sharp tongued. But with her panache and prowess Aishwarya Lekshmi turns the bland character into something that you’ll enjoy watching. Her Mehrunissa Khadarkutty has spunk! Aneesh Gopalan, playing the hero’s sidekick Suni is easily one of the most likable characters of the movie. As Suni, Aneesh is funny and in control of his character. Social media star Anu K Aniyan, aka Thera Para George has arrived! If he hadn’t proved himself as an actor yet, this will do it. Gopi Sundar’s music aides the movie to a large extent. Even when the movie fails to emote, the music kicks in.

Argentina Fans Kaattoorkadavu misses at the story. It hops around trying to be a football movie and a rom-com, missing the essence of either by a large margin. At the end it doesn’t give you the adrenaline rush a good football movie is supposed to give you. Neither does it give you the feel-good mushy warmth of a good romantic comedy. 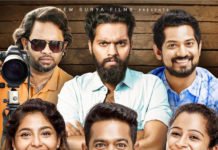